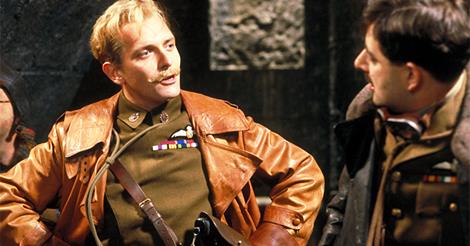 Captain Blackadder, Lieutenant George, and Private Baldrick see joining the Air Corps as a great way of sitting in a classroom instead of fighting on the front lines. Unfortunately for them, the course is taught by Squadron Commander Flashheart, who lives for danger- much like his nemesis, the infamous Red Baron. Blackadder joins the Royal Flying Corps in order to escape the trenches.

Unfortunately, on his maiden flight as a “20-minuter”, Blackadder – with navigator Baldrick at his side – is shot-down behind German lines, and captured by their number 1 flying ace, Baron Von Richthoven.

Lord Flashheart battles the Red Baron in order to rescue them.

The chirpish, upbeat and incredibly naive attitude that George has  is amazing.

This is probably his best Blackadder Goes Forth quote. We’ve put a clip of this scene below as well. George  – Crikey! I’m looking forward to today. Up-diddly-up,
down-diddly-down, whoops-poop, twiddly-dee, a decent scrap
with the fiendish Red Baron, a bit of a jolly old crash
landing behind enemy lines, capture, torture, escape and
then back home in time for tea and medals.

BA – George, who’s using the family brain-cell at the moment?
This is just the beginning of the training. The beginning
of five long months of very clever, very dull men looking
at machinery.

You can check out the full script here for Blackadder Private Plane.

You can find images, quoes and scripts from series 4 of Blackadder here: