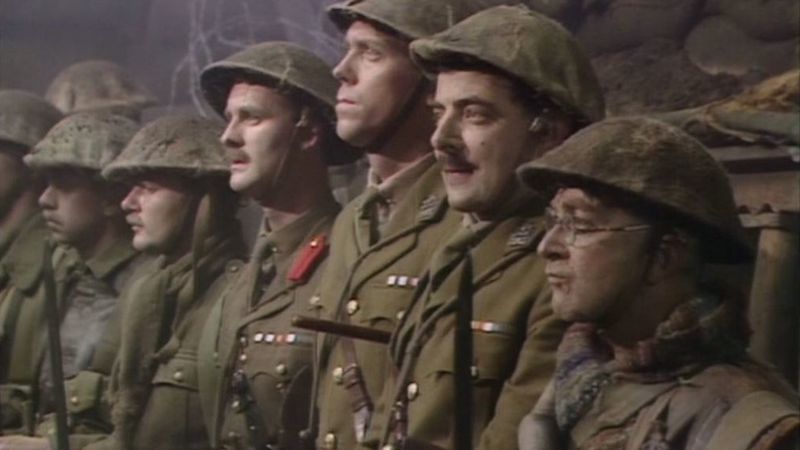 The final scene of Blackadder Goes Forth. How is it possible that an episode of a comedy show first broadcast in 1989 still gives us goosebumps?

The last scene of Blackadder Goes Forth is also one of the most poignant and emotional few minutes of television ever created. How is it possible that this show, first aired 28 years ago, can still give us goosebumps?

A lot of it is to do with the build up, not just within the last episode ofBlackadder of Blackadder Goes Forth itself, but the entire series.

In the first 3 series of Blackadder, the main character is constantly trying to better himself in any dodgy, conniving, scheming way he can.

Blackadder Goes Forth is different though. In this series, all of his cunning plans revolve around one simple goal – To survive. Blackadder knows that the longer he spends in the trenches, the greater his chances of dying become.

So, he embarks on a series of adventures to get him out of there.

He joins up with the 20 minuters thinking life as a pilot would be an easy option, tries his hand at cooking, and even becomes a spy catcher.

Whatever he does, though, he always ends up back in the trenches.

Final Episode of Blackadder Goes Forth

And until finally, we come to the last episode.

All of Blackadder’s schemes come to nothing, and even sticking a pair of underpants on his head and two pencils up his nose doesn’t work!

Good Luck Everyone (Blackadder over the top)

His schemes to get out of the trenches fail, and Blackadder and the boys have to make a charge into no-mans land as part of the big push.

All of the comedy in the episode has built up, and now we are giving a stark contrast.

In Flanders Fields
BY JOHN MCCRAE

In Flanders fields the poppies blow
Between the crosses, row on row,
That mark our place; and in the sky
The larks, still bravely singing, fly
Scarce heard amid the guns below.

We are the Dead. Short days ago
We lived, felt dawn, saw sunset glow,
Loved and were loved, and now we lie,
In Flanders fields.

Take up our quarrel with the foe:
To you from failing hands we throw
The torch; be yours to hold it high.
If ye break faith with us who die
We shall not sleep, though poppies grow
In Flanders fields.

If you liked this article about the Black Adder ending, you might also be interested in the other Blackadder posts: