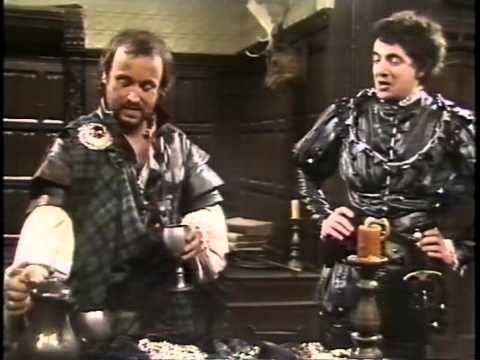 The Blackadder pilot episode was titled ‘The Black Adder’, and was filmed on 20 June 1982, Blackadder fans will note that the character of Blackadder is similar to the second series rather than the first.

First off, if you really wanted to look at the Blackadder episode WITH a pilot, you should check here – Blackadder Private Plane full script!

This short post is about the unaired Blackadder pilot episode known as ‘The Black Adder’.

Have you seen or even heard of it before? This pilot episode of Blackadder was never broadcast in the UK, and it looks unlikely it ever will be.

Apparently, the original tapes were badly damaged in storage, and deemed unfit for broadcast.

From time to time, they are published on YouTube, but then quickly taken down again. There are also bootlegs on various torrent sites (allegedly!). What’s it all about then?

A look at the episode:

The episode opens with this –

“It is Europe, 400 years ago. In Spain War rages, as Christians from every land fight off the threatening terror of Turkish invasion. The French… are in uneasy peace. But in England, under the tutelage of a powerful King, the Ship of State ploughs a steady course as the Court awaits the Queen’s birthday and the return of a Scottish Hero from the War…….”

The plot for the pilot episode of Blackadder is very similar to the second episode of the first series. There are two main differences.

Firstly, Baldrick is played by Philip Fox and not by Tony Robinson.

Secondly, Blackadder is much similar in characteristics to the Edmund we know and love from the second series, rather than the weasel from the first!

There is also another VERY important Blackadder trivia fact. The Blackadder pilot episode was the first in which the words ‘I have a cunning plan‘ were used.

Quotes from the Blackadder Pilot Episode

These are the best quotes from the pilot episode. You will no doubt recognise these from later series!

Harry, Prince of Wales: Now, I’m afraid there is going to have to be a certain amount of… violence. But bare in mind, it’s all for a good cause!

The Laird of Roxburgh, Selkirk and Peebles: Baldrick, that is the worst plan since Olav the Viking ordered 20.000 helmets with the horns on the inside.

Prince Edmund: These letters are dated November and December 1523. Which, Henry, in relation to your date of birth, is precisely nine months bef…

Prince Henry: After I was born!

The King: But about nine months before your birth, Edmund.

Prince Henry: No, I think you’re the bastard, Edmund.

Yes, we need something more cunning.

I have a cunning plan.

Yes, perhaps, but I think I may have a more cunning one.

Yes, but not cunning enough, I imagine.

Well, it depends how cunning you mean, sir.

Well, I mean pretty damn cunning, how cunning do you think I mean?

Mine’s quite cunning, my lord.

Well my lord, first you ask him to come with you.

Oh yes, very cunning, brilliantly cunning, I ask him to come with me, and then, and then stab him perhaps. How cunning can you get?

Additional note – The family coat of arms shown in the final shot shows this:

A rough translation turns it into:
I came, I saw, I castrated the bastards! Additional notes – We are working on getting a full script together for the pilot episode of Blackadder. We would also love to know if you have seen any video online we can link to.