There are a number of Blackadder specials which accompany the TV series. They expand the Blackadder universe, sometimes linking with a previous series, sometimes giving a tantalising glimpse to Blackadder TV series that never were.

This Blackadder special, is just 15 minutes long, and is set during the English Civil War. Filmed for the Comic Relief Red Nose Day, it was broadcast on Friday 5 February 1988. Sir Edmund Blackadder and Baldrick, try to assist and save the defeated King Charles I of England. 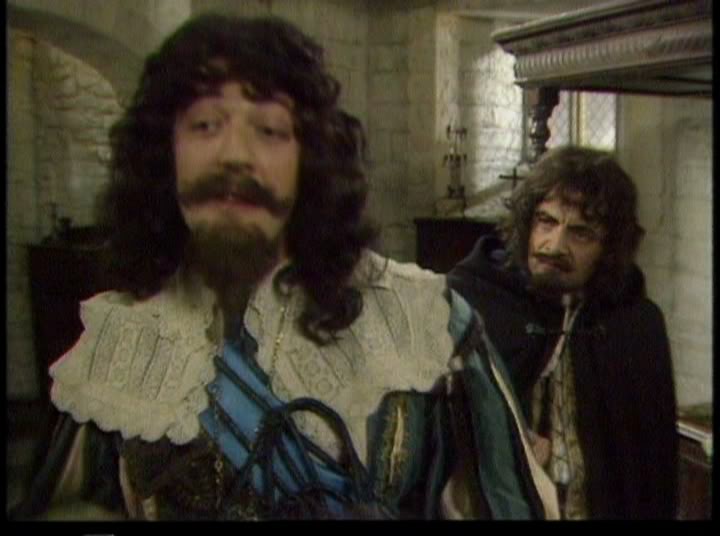 Blackadder’s Christmas Carol has taken on a status as reverential as the original Christmas Carol on which it is loosely based. Unusually, Blackadder, or Ebenezer Blackadder as he is called in this special, is the total opposite from his normally selfish and conniving self. In fact, he is described as the “kindest and loveliest” man in England.

Picture the Christmas carol in reverse, and you get a good idea as to the direction this Blackadder Christmas Special takes!

Blackadder: Back and Forth

This Blackadder special is a tale of time-travelling fun, filmed for the millennium. After planning to fool his friends with a fake time machine, Blackadder and Baldrick find out that by a bizarre set of circumstances, it actually works! Look here for more information on Blackadder Back and Forth.

Blackadder and the King’s Birthday

A short sketch performed at the Prince of Wales’ 50th Birthday Gala. It featured Rowan Atkinson as Lord Blackadder and Stephen Fry as King Charles II, and was televised on ITV (in the UK) on 14 November 1998.

A short monologue performed at the Dominion Theatre for the Royal Variety Performance 2000. It features Rowan Atkinson as the modern-day Lord Edmund Blackadder of Her Royal Highness’s regiment of Shirkers. The sketch was written and introduced by Ben Elton, who was the compère of the evening.

Terry Wogan interviews Blackadder and Baldrick, both of which appear and behave as they are in series 3, with Blackadder insulting both Baldrick and Terry Wogan. This special cameo was done during a TV appeal for Children in Need.

Blackadder and the Banking Crisis

A new Blackadder sketch about the banking crisis, performed at a special charity gala event “We Are Most Amused” in aid of the Prince’s Trust. Sir Edmund Blackadder is the chief executive of the Melchett, Melchett & Darling bank, who brings his gardener Sodoff Baldrick to an enquiry