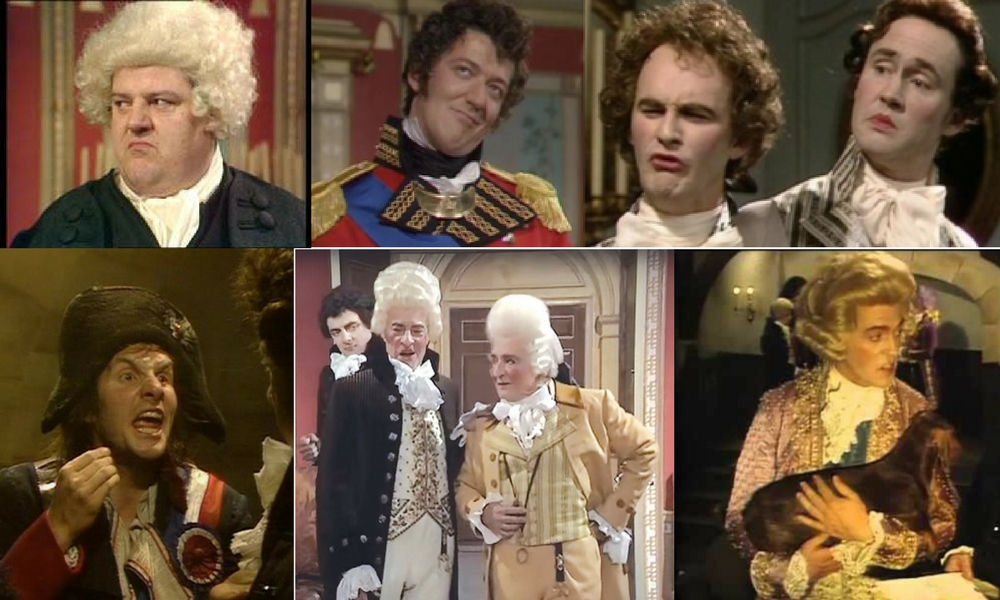 The third series of Blackadder has some of the finest cameo appearances in British Comedy. Here’s 5 of the best.

Set during the era of the British Regency, Blackadder is a butler to thicky Prince George (played by Hugh Laurie).

With the ever-present Baldrick as his dogsbody, Blackadder tries to both please his master, whilst ripping him off.

This brings him into contact with some notable historic figures of the time, including Pitt the Younger, and Dr. Johnson. An honourable mention goes to Colin the Dog as well! 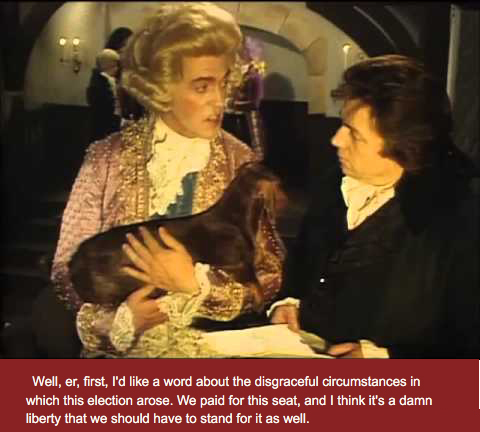 The third series of Blackadder saw a reduction in the core cast members, but also introduced a string cameo performance in each episode.

Here’s the 5 best comedy cameo appearances in Blackadder the Third, finishing with our favourite!

In Ink and Incapability, thick Prince George wants to show the world he is an intellectual by becoming the patron of the first English dictionary. Enter Robbie Coltrane as Dr. Johnson in the Blackadder 3 cast!

This episode produced some great quotes such as contrafibularities, and also revealed that he had left the word ‘sausage’ out! Robbie Coltrane also appeared as another character in the Blackadder saga in Blackadder’s Christmas Carol.

Chris Barrie as the Evil Revolutionary

In Nob and Nobility, Blackadder finds himself caught up in the French Revolution, and needs to emulate the elusive Pimpernel in order to win a reward.

The episode is notable for the appearance of Tim McInnerny (an original full cast member) as a guest star. For many people though, Chris Barrie as the Evil Revolutionary was the stand out cameo appearance.

Kenneth Connor as a Silly Actor

During Sense and Sensibility, Prince George once more shows what a simpleton he is by confusing acting with real life.

When actors are hired in order to improve the Prince’s oratory skills, all havoc lets loose! Kenneth Connor, MBE plays one of the actors who are afraid of hearing the word ‘MacBeth’.

He might be better known to you as a recurring cast member in the Carry On series, and as  Monsieur Alfonse in the TV series ‘Allo ‘Allo!

The plot of Amy and Amiability revolves around both Blackadder and Prince George being broke. As a result, Prince George must find a wife, whilst Blackadder toys with the idea of being a highwayman.

Miranda Richardson (Queenie from series 2) appears as Miss Amy Hardwood, but it is Warren Clarke as the bluff northern industrialist who makes a great cameo appearance.

Stephen Fry as the Duke of Wellington

Perhaps the greatest cameo appearance in the third series of Blackadder though, is Stephen Fry as the Duke of Wellington.

It seems like he channelled every bullying school teacher and army office he ever met to create this memorable character.

His portrayal of the Duke of Wellington surely also acted as a template for General Melchett in series 4 of Blackadder.