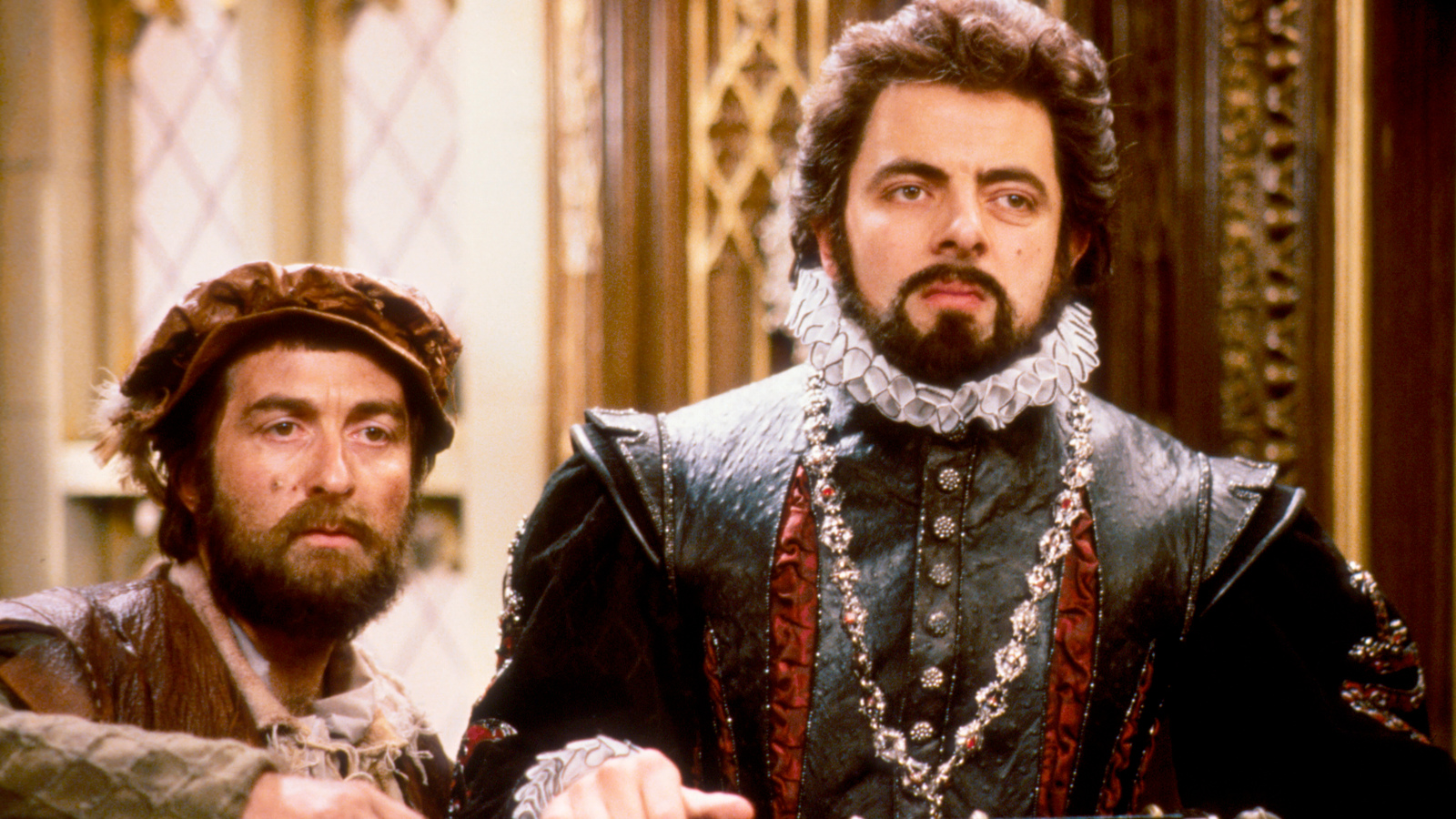 Let’s take a like at some of Blackadder’s best insults, snide remarks, and put-downs throughout the ages. Do you remember them all?

The Blackadder dynasty lasted for hundreds of years, and during that time, the sarcasm gene was sharply refined. Here are some of Blackadder’s best insults from series 1 all the way through to the Blackadder specials.

1. ‘Baldrick, does it have to be this way? Our valued friendship ending with me cutting you up into strips and telling the prince that you walked over a very sharp cattle grid in an extremely heavy hat?’
Blackadder Series 3 Episode 6 Duel and Duality

2. ‘Your brain for example- is so minute, Baldrick, that if a hungry cannibal cracked your head open, there wouldn’t be enough to cover a small water biscuit.’
Blackadder Series 4 Episode 1 Captain Cook 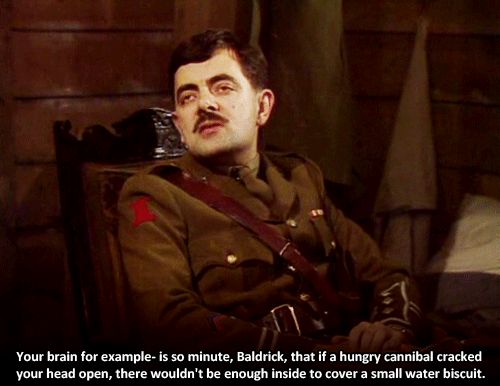 3. ‘To you, Baldrick, the Rennaissance was just something that happened to other people, wasn’t it?’
Blackadder Series 2 Episode 2 Head

4. ‘The girl is wetter than a haddock’s bathing costume.’
Blackadder Series 3 Episode 5 – Amy and Amiability

5. ‘Unfortunately most of the infantry think you’re a prat. Ask them who they’d rather meet, Squadron Commander Flashheart or the man who cleans out the public toilets in Aberdeen, and they’d go for Wee Jock Poo-Pong McPlop every time.’
Blackadder Series 4 Episode 4 Private Plane

6. (Blackadder is asked if he thinks Dr Johnson is a genius)
‘No sir, I do not. Unless, of course, the definition of ‘genius’ in his ridiculous Dictionary is “a fat dullard or wobblebottom; a pompous ass with sweatly dewflaps”.’
Blackadder Series 3 Episode 2 – Ink and Incapability Full 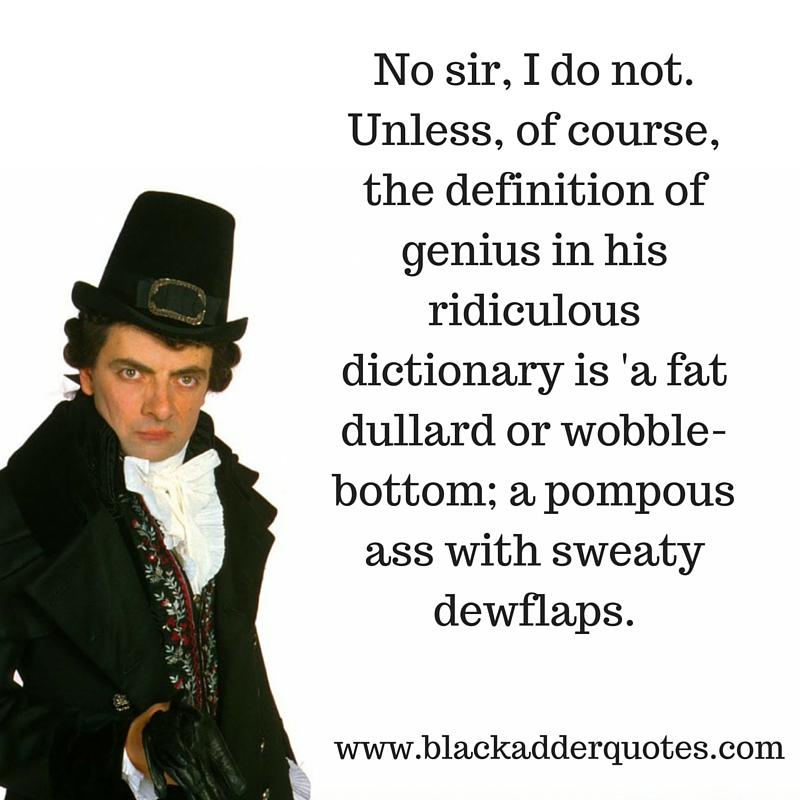 7. ‘There hasn’t been a war run this badly since Olaf the hairy, King of all the Vikings, ordered 80,000 battle helmets with the horns on the inside.’
Blackadder Series 4 Episode 3 Major Star Full 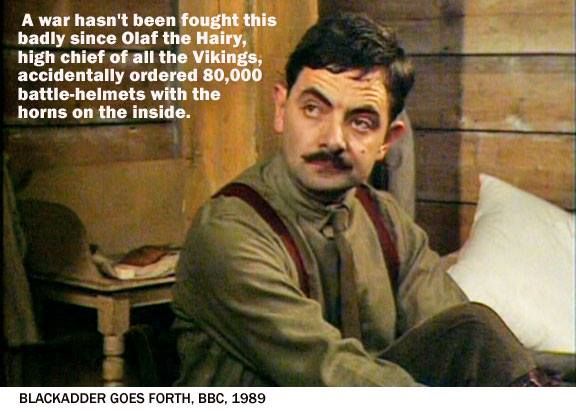 9. ‘Baldrick, you wouldn’t recognise a subtle plan if it painted itself purple and danced naked on a harpsicord singing “subtle plans are here again”.’
Blackadder’s Christmas Carol

10. ‘Baldrick, in the Amazonian rain forests there are tribes of Indians as yet untouched by civilisation who have developed more convincing Charlie Chaplin impressions than yours.’
Blackadder Series 4 Episode 3 Major Star Full

12. ‘You’re the worst cook in the entire world. There are amoeba on Saturn who can boil a better egg than you.’
Blackadder Series 4 Episode 1 Captain Cook

13. ‘Baldrick may look like a monkey who’s been put in a suit and strategically shaved…’
Blackadder Series 3 Episode 1 Dish and Dishonesty

14. ‘The eyes are open, the mouth moves, but Mr Brain has long since departed, hasn’t he, Perce?’

16. ‘Percy, far from being a fit consort for a Prince of the Realm, you would bore the leggings off a village idiot. You ride a horse rather less well than another horse would. Your brain would make a grain of sand look large and ungainly and the part of you that can’t be mentioned, I am reliably informed by women around the court, wouldn’t be worth mentioning even if it could be. If you put on a floppy hat and a funny codpiece, you might just get by as a fool, but since you wouldn’t know a joke if it got up and gave you a haircut, I doubt it.’

18. Blackadder: ‘Baldrick, I would like to say how much I will miss your honest, friendly companionship.’
Baldrick: ‘Thank you, Mr B.’

Blackadder: ‘But, as we both know, it would be an utter lie. I will therefore confine myself to saying simply, “Sod off and if I ever meet you again, it will be twenty billion years too soon.”‘

20. ‘Baldrick, your head is as empty as a eunuch’s underpants.’ 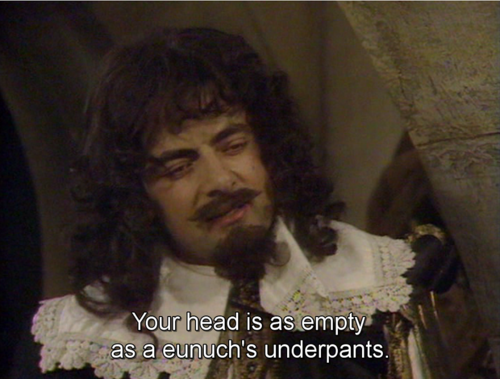 21. ‘It’s so dirty, it would be unacceptable to a dung beetle who had lost interest in its career and really let itself go.’

Advanced Mathematics With Baldrick – Some Beans

23. ‘We’ve been sitting here since Christmas 1914, during which time millions of men have died, and we’ve advanced no further than an asthmatic ant with some heavy shopping.’ 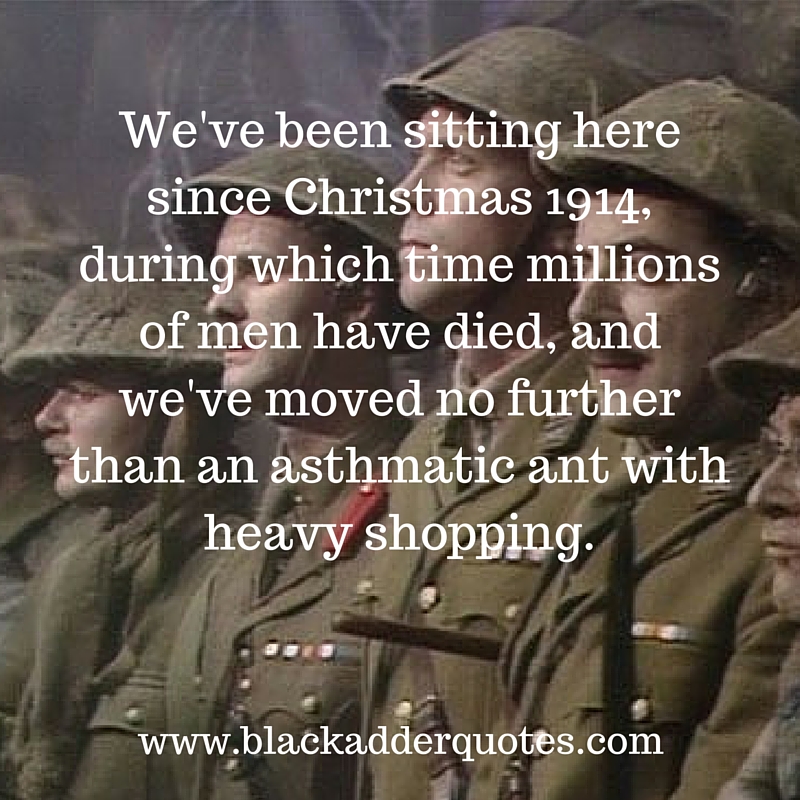 24. ‘Now, the sort of person we’re looking for is an aggressive lout with the intelligence of a four-year-old and the sexual sophistication of a donkey.’

25. ‘Your family’s history in the department of cunning planning is about as impressive as Stumpy O’Leg McNolegs’ personal best in the Market Harborough marathon.’